Phil Knight, the founder of Nike, recently wrote a book about the shoe business. His book, Shoe Dog… continued below.

His book, Shoe Dog gives people an inside look at the shoe business. Phil uses many of the common shoe terms in the book. The term, “brogue,” is one of those terms. The word brogue is often misunderstood. A brogue is a shoe that has a perforated design on the upper of the shoe. Many brown and black wingtip shoes sport the classic brogue perforated design on the upper.

The modern word, “brogue,” comes from the Scottish word, bròg. In the early days, Scottish brogues were useful because the holes in the upper of the shoe allowed the water to drain when a man crossed a bog or a small stream. But the perforated designs on today’s brogues are not bog worthy. Most brogues are constructed with a lining under the upper material, so draining water is not a brogue feature these days.

What is the Difference Between a Black Wingtip Shoe and a Brogue?

In order for a shoe to be a brogue, it has to have a perforated, or “perf” design on the upper. The perf design is usually on the tip, and around the eye stay of the shoe, as well as on the back foxing. If there is no perf design, then the shoe is just a lace up wing or straight tip. Perf-less wingtips and straight tips are popular shoe styles. Almost every shoe manufacturer uses the plain wingtip or straight tip to create athletic-inspired footwear, as well as simple casual footwear.

Mens wingtip shoes is the most popular shoe style in the fashion industry. This Pattern is popular for the perfect formal look.

Brown and Black Wingtip Shoes: Why It’s All About the Pattern

In today’s fashion world, all wingtips can be formal. Formal depends on personal style and the nature of the occasion. Most men have at least one pair of wingtips in their closet. The wingtip pattern is versatile and can be part of any personal style statement. Athletic designers use the wingtip to create new athletic-inspired casuals, and casual designers use white and black wingtip shoes as the base pattern for their canvas inspired product line.

Brown wingtip shoes are not just for special occasions. Because brown wingtips can be hiking shoes, party shoes, work shoes, they are everyday shoes. They look good with jeans, khakis and dress slacks. And wingtip dress shoes in brown and black are perfect for business suits and for semi-formal and formal occasions. The wingtip upper material and the outsole are also important. Those two elements of the shoe determine when and how to wear a wingtip.

If you can only afford one pair of mens dress shoes, consider buying wingtips. They are versatile, so you can wear them with a variety of outfits and to many different occasions. A pair of wingtip shoes can last you a lifetime and be your go-to footwear for any event. 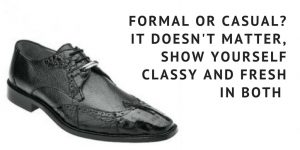 Long before the Kennedy boys wore a pair of wingtip mens spectator shoes, the two-tone wingtip was an important part of ...